Calvin Johnson is one of football’s most dynamic playmakers. In his nine years in “the League”, he’s dazzled opposing defenses with his quick feet and great hands, positioning himself in the discussion for greatest wide receiver to ever play the game, alongside Hall of Famers like Lynn Swann, Jerry Rice, and Michael Irvin. Every week, regardless of how his team, the Detroit Lions, was doing on the season, he came out and competed, even during the doldrums of the Lions’ 0-16 season in 2008. But one of football’s biggest stars had his humble beginnings in the Atlanta area and rose to stardom under the same lights Justin Thomas and Marcus Marshall do today. 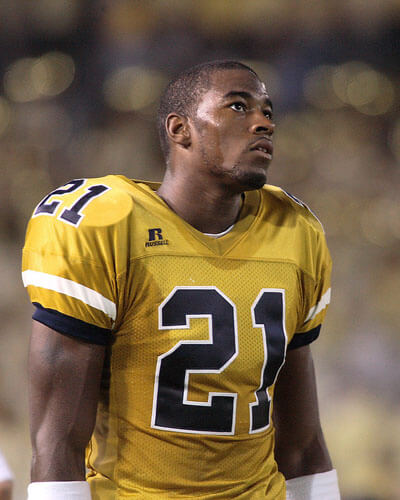 Calvin Johnson committed to Tech in early 2004 as the first five-star recruit in school history (if you are not familiar with the star ratings of college football recruiting, know this: Johnson was really, really, really good in high school) and the #3-ranked wide receiver in the nation1. In the Technique’s 2004 season preview, Michael Clarke wrote of Johnson, “[he] will be competing for playing time; he has shown incredible athletic ability, but the transition between high school and college football for such a great athlete can be difficult.” But Johnson was no mere mortal wide receiver. In his three years at Tech, Johnson thrived in head coach Chan Gailey’s offense, posting 2,927 receiving yards, 178 receptions, and 28 touchdowns, good enough for 1st, 2nd, and 1st (respectively) all-time in Tech football history2.

Johnson, quarterback Reggie Ball, and running back P.J. Daniels wowed crowds at Bobby Dodd Stadium back when many of us were still watching Tom and Jerry in our PJ’s every Saturday morning. This core group led Tech to an ACC Championship berth, three straight bowl games, and an overall record of 23-15. After a successful 2006-07 campaign in which he proved he took home the Biletnikoff Award, the Warfield Trophy, a first-team All-American selection, and ACC player of the year, Johnson declared his eligibility for the NFL Draft, foregoing his senior season at Tech and the final 30 credits of his degree in Building Construction2. 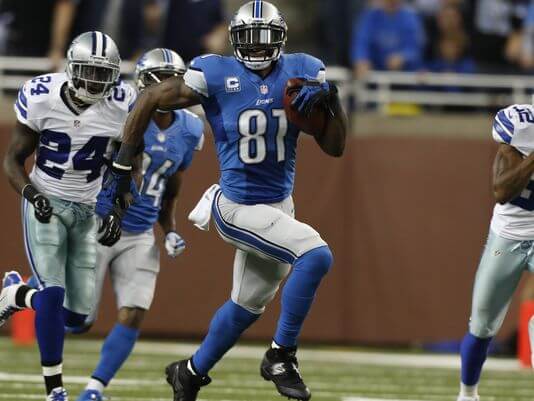 In the 2007 NFL Draft that April, Johnson was selected 2nd overall by the Detroit Lions. Led by journeyman quarterback Jon Kitna, the 07 Lions played a middling season, going 7-9 and missing the playoffs. Johnson was listed as the #2 receiver on Detroit’s depth chart, behind two-year veteran Roy Williams, who carefully tutored Johnson in the ways of “the League”. In a successful rookie year, Johnson turned in 48 receptions for 756 yards and 4 touchdowns3. During that year, Williams nicknamed the young rookie “Megatron”, noting the size of his hands in comparison to those of the villain from the Transformers series. That moniker has stuck as Johnson’s legend has grown over the years. In the Lions’ deplorable 2008 season, in which they went 0-16, Johnson was the only bright spot in an otherwise awful season - totaling his first 1000-yard season and 12 touchdowns in his sophomore season. In 2012, his seminal season, Johnson chased and surpassed Jerry Rice to become the single-season receiving yards record-holder, racking up 1,964 yards even as the Lions stumbled to a 4-12 season4. In his nine seasons, Johnson has led the NFL in receiving twice, been named to three NFL All-Pro teams, and been voted to the Pro Bowl six years in a row. Time and time again, even when under duress from smart-mouthed cornerbacks or suffering from injury, Johnson has proven himself as a reliable and skilled pass-catcher, carrying his team when it matters the most.

If you asked me to sum up Calvin Johnson’s career and its influence on the NFL, I couldn’t. How do you expect me to distill such a great athlete’s on-field excellence into a few sentences? Even this, a premature obituary on his career, is tough to write - Johnson has accomplished so much in the last 12 years on the field: both as a Yellow Jacket and as a Lion. If this is truly the end of such a storied career, Mr. Johnson: thank you. Your work on the field has inspired a new generation of football players and fans, and you’ve done it all with class and humility. You’ve been a role model to us all, both on the field and off. You truly embody the Georgia Tech way. I hope to see you on campus again one day when you return to finish your degree.